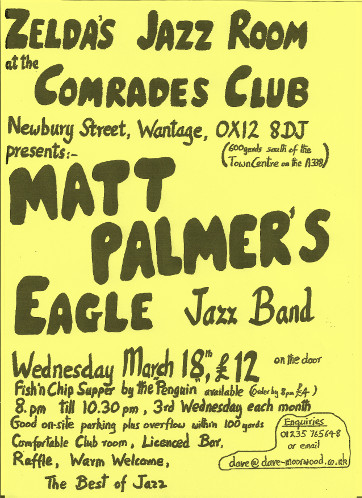 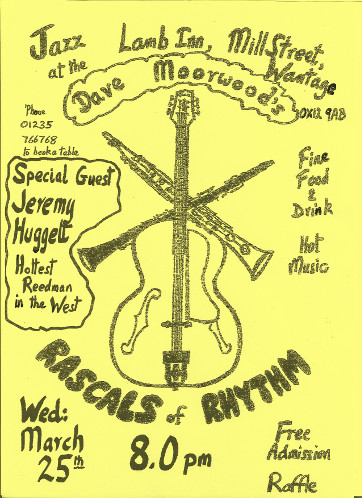 We hope nobody has bee been blown or washed away in the past stormy month. And thank you all for turning out for Frog and Henry at Zelda’s Jazz Room in the middle of it all. And what a delightful band they were. Ewan Bleach, he of the clarinet and sax, came with a big reputation amongst a smallish band of enthusiasts. He certainly lived up to it and extended it considerably with some great playing, ably supported by fine hot violin from Coleman Akin. You may also have recognised John Kelly on trombone who was last at ZJR playing guitar with the Old Hat Band showing he too is a remarkably versatile player. And then there was a most unusual but effective rhythm section: three instruments but only two players; David Neigh playing a six-string banjo while blowing a tuba on a stand and operating the valves with his feet at the same time, and F.H.Henry (Ryan Baer) – a man after my own heart – playing acoustic guitar. We hope they return for another tour next year.

We return to a more visually recognisable New Orleans style group in March when we have the very popular band led by clarinet and sax man Matt Palmer. They are always excellent value, well organised, with a good and varied repertoire and fine musicianship.

And at the Lamb, after a super session in February with Lizzie Newbury singing with the Rascals – and a full pub to hear her – we have in March a welcome return visit from Jeremy Huggett, up from deepest Devonshire. We like to call him the fastest horn in the West with his prodigious technique and big sound, but besides that he is so good at fitting in. He will mainly be featured on tenor sax and clarinet, but with three reed players on stage we shall have a lot of fun seeing how many permutations we can organise.

We must remind you also of the Pete Allen Jazz band’s monthly gig at Deanwood Park Golf Club, Stockcross, near Newbury on Sunday March 15th, at 3 pm